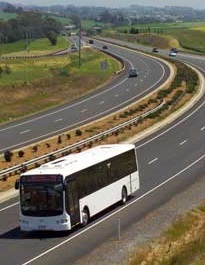 The Tasmanian Bus Association has put together its plan to tackle transport issues for an ageing and diversely located population.

Tasmanian residents are split almost evenly between country and city living, with 53 per cent of the population in urban areas and 47 per cent living rurally.

TasBus General Manager Geoff Lewis says as people grow up and move out of cities, transport systems must be tailored to respond.

“According to Department of Environment figures, there are more than 295,000 cars in the state with approximately 80 per cent of all trips taken in a car.”

Among the suggestions in the bus association’s plan is for the state to create a centralised transport authority to encompass the delivery of all systems. The plan has also flagged the need for an audit of existing transport services and the establishment of a consultative stakeholder group.

“In our view incumbent operator should have first rights on option for renewal if they have met agreed performance criteria, creating greater incentives to perform and provide stronger investment certainty,” Mr Lewis says