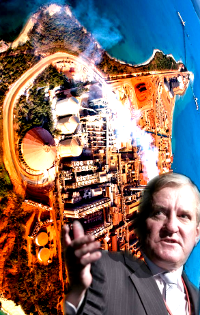 Discussions are planned which may yield a deal for the future of the town of Nhulunbuy, which will have its economy decimated when a nearby Rio Tinto refinery is closed.

The Federal Government says it will meet in Nhulunbuy with the Northern Territory Government, Rio Tinto and representatives of the community to discuss what can be done as the refinery operations end.

Rio Tinto made the decision in the later part of this year that the Gove alumina refinery in NT would be shut down so that the company can focus on other ventures, amidst an uneasy global resources market.

He has pledged for meetings to continue on a regular basis in the coming months to ensure community concerns are understood.

“The Australian Government has been in regular contact with Rio Tinto as the company has detailed its approach to winding down the refinery and meeting its obligation to supply services to the community,” Mr Macfarlane said.

“The Australian Government will work closely with stakeholders to provide the community the support it needs without duplicating what Rio Tinto and the Northern Territory Government are doing.”

The Minister says he has encouraged Rio Tinto to be upfront with local community members, making sure they have access to full information as the refinery winds down.