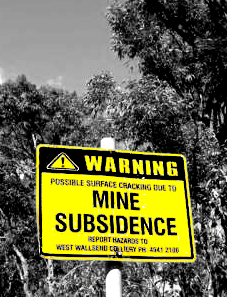 Media investigations have shown the ongoing costs of the mining industry in New South Wales, with close to $9 million spent dealing with legacy mine issues in the last five years.

Severe mine subsidence damage has cost the state of New South Wales $8.7 million in land acquisitions alone since 2009, but experts say the cost will continue to rise.

Fairfax Media outlet The Newcastle Herald has revealed that the NSW Mine Subsidence Board was forced to buy five subsidence-damaged homes over the last financial year for a total of $3.8 million.

The report says the Board has paid two large claims for subsidence damage to infrastructure over the past seven years, totalling more than $17million.

More than a dozen homes were damaged when a section of the Old Lambton Colliery Workings collapsed in 2012, the result of failed foundations from a mine dug in 1910.

One couple recently had repairs completed under their Waratah home, fixing a flow of water from a derelict mine which had been causing problems for more than 30 years.

Reports say the full image is much larger though, and that only about 10 per cent of subsidence claims actually saw compensation in 2011-12, a total of 44 from 438 claims.

Mine subsidence expert Professor Philip Pells, civil engineer and adjunct professor at University of NSW from 1993 to 2009, says there is no doubt that problems from over a century of mining will continue to appear.

“This will continue to occur.

“That is why the Mine Subsidence Compensation Act was set up, because it was known this type of thing was going to happen on a regular basis... [but] in far too many cases the system is not working to benefit the people that it should be assisting,” Professor Pells said.

“It is far too narrow and the onus is always on the residents to prove, against opposition from the board, that the damage is from mine subsidence.

“It can very very, very difficult for people who are impacted by sinkholes or subsidence to be looked after or compensated,” he said.

The Property Council of Australia has weighed in, proposing a developer-contribution scheme which would create a funding pool for grouting old mine workings.

The Property Council proposes the NSW Government would contribute funds, with the cost of work to be recouped from developers.

The Urban Development Institute of Australia agrees that something must be done.