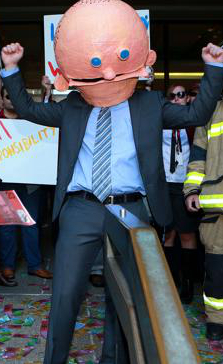 About 48,000 Queensland public servants have earned a “fair and reasonable” salary increase of 2.2 per cent per year over three years, ending more than 18 months of negotiations.

The drawn-out talks were caught on numerous points, devolving occasionally into legal bickering and stymied by minutiae.

The Together Union has praised the victorious conclusion of the back-and-forth with the Newman government, claiming its last-minute campaign for members to swamp the Premier with angry postcards was the final straw.

Queensland’s public sector has taken a massive battering in the years since Premier Campbell Newman’s election, seeing around 14,000 jobs culled from the sector.

“The Queensland government has been trying persistently since mid-2012 to give the core public service a pay rise, but our efforts have been stymied at every turn by the Together Union,” Queensland Premier Campbell Newman said.

“Enough is enough. The government believes hard working public servants are entitled to a fair and reasonable pay rise, and now they have it.”

The recent increase applies to staff signed-on to the Government’s Core agreement, the pay rise will be backdated to 1 December 2013, though it is not clear from when it will be paid.

Together Union president Vivienne Doogan says Mr Newman said in a letter to staff that “this wage increase will start appearing in your payslips immediately,” but says that is refuted by the Public Service Commission’s statement that increase will come in February 2014.