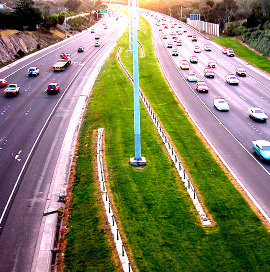 The Victorian Health Department has put out its list of concerns about the multi-billion-dollar East West link in Melbourne.

The department is the latest group to press the Victorian Government for more information on the large infrastructure project, which has been the subject of protests and controversy since its announcement.

Meanwhile, a legal battle against the East West Link and the business case underpinning it has been launched.

Victorian Health says the project increased the potential for road crashes, will cause disruption to key public transport services and reduce the ability of cyclists and pedestrians to move around their areas.

The concerns will be highlighted in the health department’s submission to the East West link assessment committee.

The tunnel will link two major freeways to create a faster path from one side of Melbourne to the other, but it has been mired in political opposition from the Labor party, several inner-city councils, concerned and affected residents.

The Health Department’s key worry is around road safety issues leading to “an increased incidence of accidents due to construction vehicles in most precincts”.

“As well as the impacts on the public transport services, the reduced connectivity for north-south road users and local access removes the option of active transport [cycling and walking],” said the submission by Health Department secretary Dr Pradeep Philip.

As with many submission so far, Dr Philip has called for more information and transparency through performance objectives.

He also says requirements to soften these impacts should be outlined in greater detail.

“[The department] notes that the Social Impact Assessment includes health impact concerns raised by communities affected by the proposal, and that it concludes that the post-mitigation level of impact or benefit is ‘negligible’,” he said.

“Further details on mitigation strategies would be beneficial.”

The Health Department also fears future effects after the tunnel is complete, warning that the increased noise from new traffic will have to be investigated.

The East West Link plan will also be the subject of a Supreme Court challenge, as Melbourne resident Mr Anthony Murphy and a team of lawyers try to halt the tender process for the large infrastructure project by arguing the state government has misled the public.

The government insists the project will create $1.40 of benefits for every $1 spent, but there has been a lack of further details. It has now been revealed that the claim relies heavily on money generated by things the state government calls "wider economic benefits".

The legal team will argue the that the projections are "misleading representations" of the money to be made, which are not based on any standard methodology for such major projects.