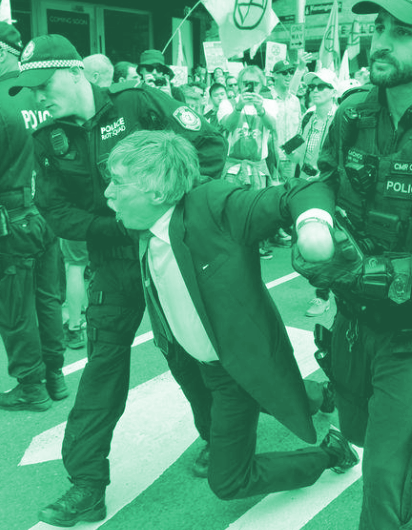 Extinction Rebellion (XR for short) is a new environmental movement engaging in non-violent civil disobedience - causing as much disruption as needed to force a public conversation.

Members of the XR movement are making three demands;

Since the new group was launched in the UK last year, more than 1,000 jurisdictions around the world have declared a climate emergency.

The movement has sprouted chapters in more than 70 countries and is now operating in every state and territory across Australia.

In London this week, police arrested 276 activists as they blocked bridges and roads in the city centre, and glued themselves to cars. Meanwhile, protesters in Berlin halted traffic at the Victory Column roundabout, chanting; “Solid as a rock, rooted as a tree”.

This all comes just weeks after millions of young people flooded onto the streets of cities around the world, inspired to take action by 16-year-old Swedish activist Greta Thunberg.

Here in Australia, Police have arrested protesters during similar climate change demonstrations, including elderly activists who were dragged away by force in Melbourne.

Monday’s activities alone saw 38 arrests in Sydney, with charges including failing to comply with direction, while in Melbourne 10 people were arrested for failing to obey move on orders and seven protesters were arrested in Brisbane.

In Sydney, protestors blocked major roads and intersections before a series of arrests saw the movement moved to a nearby park.

“While police respect the right of individuals and groups to protest, we have a responsibility to the community and local businesses to ensure they can go about their normal activities without being impacted on or put at risk,” he said.

“We are aware that this particular group of protesters intend to cause significant disruption to the community, and any future activity of this nature will not be tolerated by NSW Police.”

Hundreds marched through central Brisbane amid heavy police presence, with some blocking Victoria Bridge by locking on to a timber structure in the centre of the road.

Seven people were charged, including for allegedly contravening police directions, walking onto a roadway when not authorised, obstructing police and public nuisance.

In Melbourne, protesters flooded the intersection at Flinders Street and held a sit-in in the busy intersection of Russell and Bourke streets, causing peak hour traffic disruptions.

Activists also gathered on the steps of the Victorian Parliament and meditated for climate change.

Organisers of the Australian actions say they expect thousands more people to join in civil disobedience during the week.

On Tuesday morning, authorities were called to negotiate with a man hanging from a harness off the underside of Brisbane's Story Bridge.

More information is available at the official XR site.