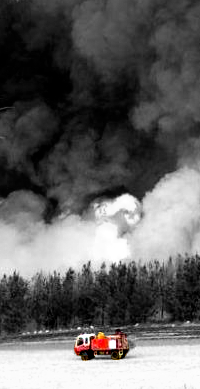 The Victorian Government will not merge the state’s two fire services, despite strong recommendations to do so.

It called for the executive boards of both groups to become one, in an effort to break down the entrenched, adversarial culture in the fire agencies.

The review, conducted by David O'Byrne, found morale in the fire services was at its lowest in decades, as the divide between senior management and firefighters continues to grow.

“At times, the relationship between the leadership and firefighters seems like trench warfare,” the report said.

“It is evident to the review that there is a serious and fundamental disconnect between the senior management and operational firefighters.

“In the case of MFB, this has become an almost uncrossable chasm.”

The fire services have been almost irreparably damaged by a fundamental collapse in trust and goodwill, the review found.

The Victorian Government says it will implement 18 of the 20 recommendations.

Emergency Services Minister Jane Garrett explicitly rejected the idea of a board merger.

“Just changing a board structure, in my mind, will add more problems than solve them,” she told the ABC

Ms Garrett said the two were “too different” to work together.

“The CFA [has] the volunteering culture, the fact that it's both in regional and rural areas,” she said.

“The MFB is structure more around stations rather than the communities from which people spring.”

The report said much of the blame for the currently tattered state of the fire services was due to industrial disputes during the term of the former LNP government.

“It is clear that the previous government deployed a deliberately ideological attack against the UFU and effectively encouraged CFA and MFB to go to industrial war with their respective workforces,” it said.

The review found that firefighting is a tough choice for women.

Firefighters reported that women had to work twice as hard to earn the same level of acceptance as men.

There were also claims of sexual harassment and threatening behaviour.

Peter Marshall, secretary of the United Firefighters Union, wants the boards of both agencies to resign.

“It's a damning indictments of CFA and MFB management for their extensive litigation and ideological war against firefighters,” he said.

“We urge the Government to reconsider their position on that point.

“What's the point of a review if the Government doesn't act on the recommendations as specified, in particular that one about the board.

“That is just so important.”

“The two agencies, the Government, the volunteer association and the union all need to step up and show some leadership here,” she said.

“There has been decades of entrenched, adversarial unhelpful cultures, there's blame on all sides.