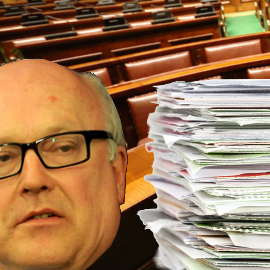 There are concerns this week that the Royal Commission into unions is heaping more work onto public servants.

A “scoping questionnaire” has been leaked to the media, appearing to ask federal departments to detail every encounter with unions over the last ten years.

It asks for an incredible amount of work from a public sector already in decline.

But the questionnaire was not put forward by the Royal Commission on Union Governance and Corruption itself, rather, it came from the office of Attorney-General George Brandis.

Some commentators have accused the Attorney-General or probing for more information that may prop up prosecutors in the Royal Commission, which is seen as an ideological attack on the power-base of the Labor Party.

The questionnaire asks for details on: relevant legislation; the appointment of trade union officials in government jobs; all talks with unions on procurement and disposal; details of grants; union gifts or donations; workplace negotiations; secrecy protocols; direct contact with the Royal Commission; all union-related documents regarding policy development, government investigations, grants, gifts and payments; and finally, the Attorney-General asks for any credible allegations of wrongdoing by union officials, agency heads, ministers, ministerial advisers or public servants.

The resources required for each department to fulfill the request are staggering, especially when compared to the time and money expended to fill a single, much more limited, Freedom-of-Information Request.

Community and Public Sector Union national secretary Nadine Flood said the public sector did not want to be involved in any witch hunting.

“Apart from tying up much-needed resources, [it] demonstrates the government’s disregard for the legitimate role of unions in the public sector,” Ms Flood told the AFR.

“The CPSU deals directly with public sector organisations every day. It’s not unusual or suspect, it’s our job.”

There are sometimes hundreds of documents and meetings between departments and unions just to achieve simple agreements or determinations. For public sector workers to dedicate their time poring over these records and highlighting the facts that the Attorney-General wants, some more valid piece of work will have to be put aside.

The extra work will only compound the stress on federal public servants, thousands of whom face redundancy in coming months.

For those that survive the chop, negotiations are ongoing for new pay deals.

In the case of Department of Human Services or Australian Tax Office staff, these deals are seen as pay cuts combined with the reduction of terms and conditions of employment.

The request adds to a growing trend by the LNP Government. Insiders say there has been a long-held tradition of not digging through departmental histories to find dirt on former governments, but the ‘pink batts’ royal commission did this and now it appears the union corruption probe will too.