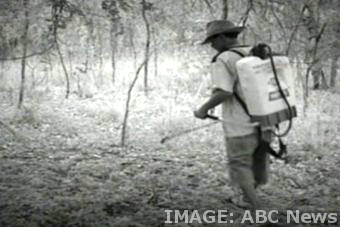 The WA Government has agreed to examine new information and reports of generational health problems from a government policy to use an Agent Orange-linked chemical in the Kimberley.

Hundreds of mostly Indigenous men were employed by WA’s Agricultural Protection Board to eradicate weeds across the West Kimberley in the nineteen-seventies and ‘eighties.

They were provided with no protection gear for the bulk of their work, which saw them routinely exposed to the now banned substance 245T; an ingredient in the infamous defoliant Agent Orange.

Families of the workers continue to report ill-health including cancer and birth defects, and believe the chemicals were responsible for the devastating effect on workers' partners, children and grandchildren.

The use of one part of Agent Orange was the subject of three inquiries in the early 2000s, which led to the then government offering a “fast track” compensation scheme for those affected.

Around 70 former workers have since applied, but only eight have been compensated. All of those to receive payouts were diagnosed with cancer.

Though there is still debate on the scientific link between exposure to dioxin and illness, or health problems through generations, the United States government has compensated Vietnam veterans, and their children, for several years.

WA Agriculture Minister Ken Baston says the government has engaged health experts and scientists to investigate the issue in the past, but would look at any new information.

“If claimants have any new information it should be presented to Government ... and supported by appropriate documentation by health professionals, so it can be examined,” he told the ABC.

The US last week announced that new disability benefits would be extended to thousands of air force veterans who came into contact with Agent Orange through contaminated aircraft.

The new deal should provide $US4.7 million for victims over 10 years.

Meanwhile in WA, the plight of many who were exposed to the same chemical is ongoing.